In August 2016, she was brought in at about 8 weeks old by Animal Friends of the Valley with a broken and displaced lower jaw where the bone had become horribly infected. Her mouth was full of pus and it was a pretty nasty mess in there. She had great difficulty eating so gruel was made so she could lap it up when she wasn’t being hand fed. The smell from the infection was an entity all its own – if it got on your scrubs no one would come near you for the rest of the day. Staff members were gowned up like Haz Mat workers when they handled the puppy. But none of that mattered to Katie. Katie would bring in extra scrubs in order to be able to hold the puppy and love on her despite her icky mouth. She and the puppy started to bond.

After a thorough exam of the mouth and after carefully considering the bone infection, Dr. Hempel determined, “I can help this puppy…..” So he did.

After two weeks on antibiotics to get the raging infection under control and (during that same time period) after the shelter released her to us permanently, she was taken to surgery where the jaw was re-aligned, wired together, and then a surgical molding compound was applied to the teeth to act as a stabilizer while the jaw healed. Healing was a long process, but she was a trooper-in fact she didn’t seem to realize there was anything wrong with her. 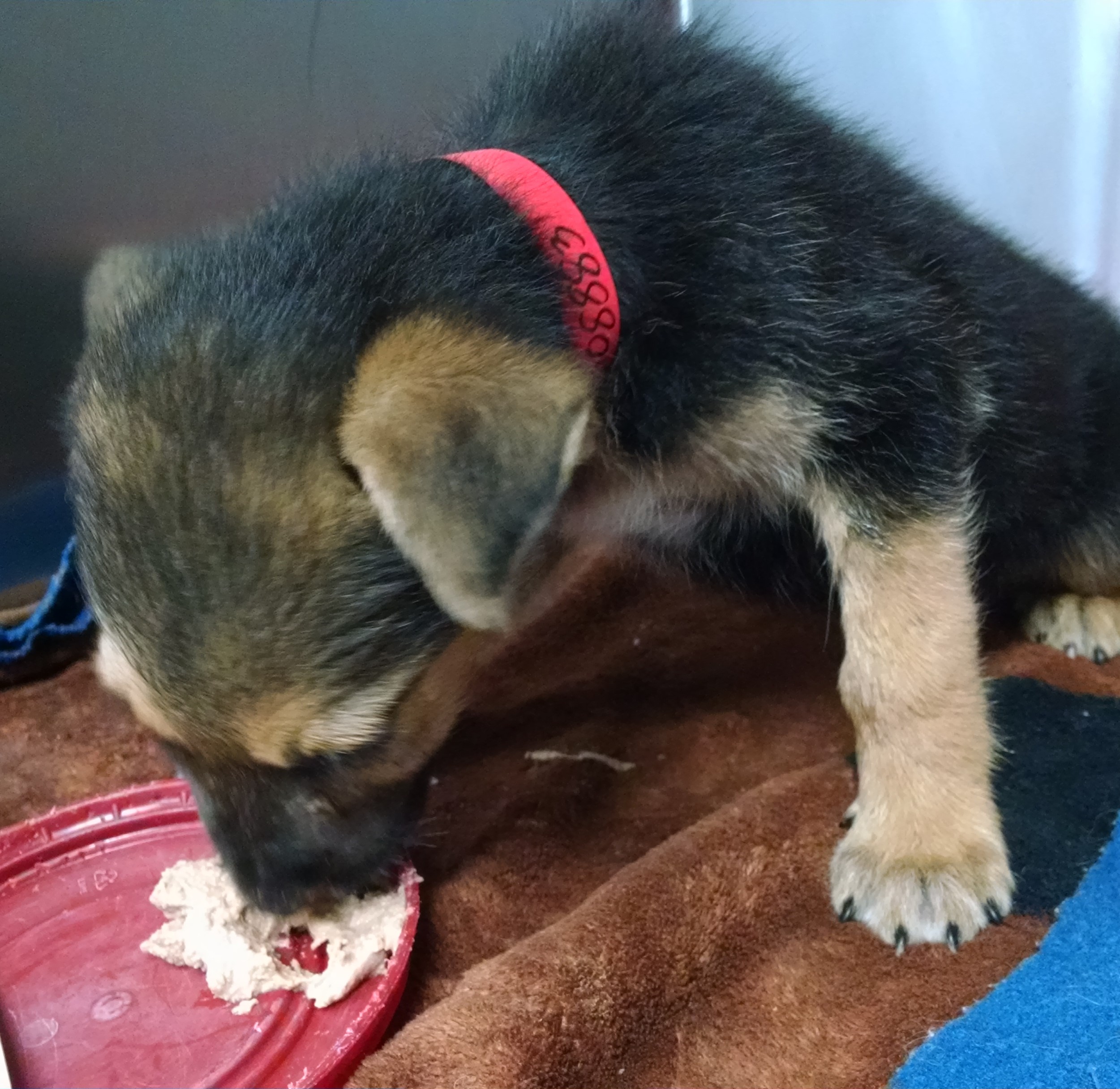 Realizing the puppy’s recuperation would be a lengthy one , Katie did not want her to miss out on learning good puppy manners, so she began working with her; teaching her basic commands and later some fun tricks like “shake”, “roll over” and “play dead”. She named her “Shalunya” due to her playful nature and propensity to be a bit of a rascal. On many occasions Katie took the puppy home to socialize with her bigger dog, and her Maine Coon cat. The cat seemed unimpressed by the pup, and barely reacted to her presence; but her big German Shepherd was afraid of the new puppy and would hide in the other room when Shalunya was in the house—dashing Katie’s hopes of being able to keep the puppy herself.

Once Shalunya was healed up and it became evident that she would be able to lead a normal life with little to no long term ill effects, Dr. Hempel gave the okay to find her a forever home.

Her forever family came in one day and saw her picture at the front desk and asked to meet her. Katie brought her up and the puppy immediately gravitated to the family’s teenage daughter. A few days later, the entire family came in to get to know Shalunya and decided they wanted her as a permanent member of their family. Since Shalunya had a couple more weeks of medications to finish, Dr Hempel spayed her and she was given the last of her vaccine series. While waiting for their new puppy to be released from care, her new family would come in twice a week to visit and play with her.

Finally, three anesthetics, four months and many medications later, this lucky pup’s big day came, and on December 1st Shalunya, whose new name is now “Samantha” (which is SO much easier to pronounce!) went home to her new family.

I've brought my dogs here for many years. I trust the veterinarians here. The staff is always friendly, happy and seem to love their job. I have moved out of the area, but I will always bring my pets here. Thank you for being there.
— Darcy P