Managing Pain Through the Science of Laser Technology

The biochemical effect of this low-level light will:

The History of Laser Therapy

The first low-level laser was developed in 1960, and early testing showed an increase in the speed and overall success of the healing process when it was used. Originally used for wound repair, clinical trials done throughout the 1970s showed the applicability of the low-level laser in therapy to be more widespread than previously thought. The 1990s came with the invention of more powerful and effective versions of the cold laser, eventually increasing its popularity in the field of rehabilitation.

Pets experience pain just like humans do, and we recommend taking steps to identify, prevent, and minimize pain in all dogs and cats. We use pain assessment as the fourth vital sign (along with temperature, pulse, and respiration).

The different types of pain include:

You can play a key role in monitoring your pet to determine whether he or she suffers from pain. Be sure to monitor behavior and physical conditions. Visit our emergency care page for more information.

Below is an example of how cold laser therapy helps heal wounds. The first photo is from 4/25/2015. A rescued K9 named Doolie, had a degloving wound to paw. The second photo is from 5/7/2015 after starting antibiotics, bandaging and laser therapy treatments. The 5/7/2015 photo was taken after only 3 laser treatments, 12 days after his first visit. Doolie's last (13th) treatment was in mid-June and the final photo was taken in July. The dramatic healing process took a total of less than 3 months after his initial injury. 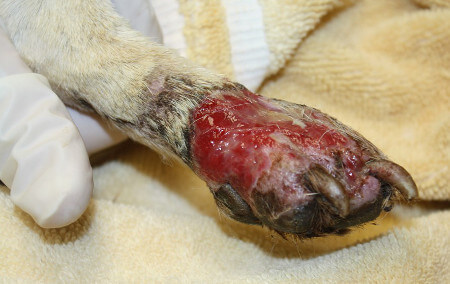 Doolie after only three treatments. 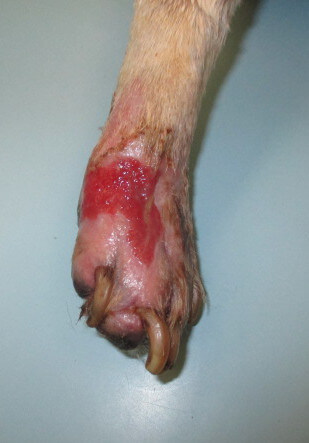 After one month and 7 laser treatments. 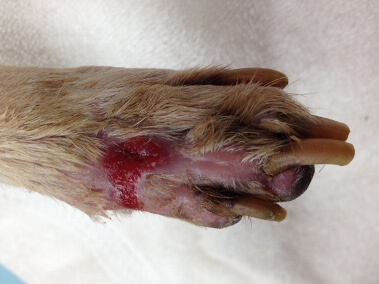 After the last treatment and hair had regrown somewhat. 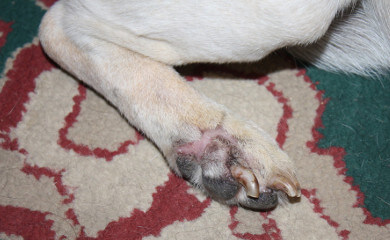 I absolutely love love Dr. Tran!! What a great person and is absolutely amazing, I've never seen a vet get on the floor and let my dog kiss all over her and get her glasses cleaned by a slobbery German shepherd!
- Stacy N