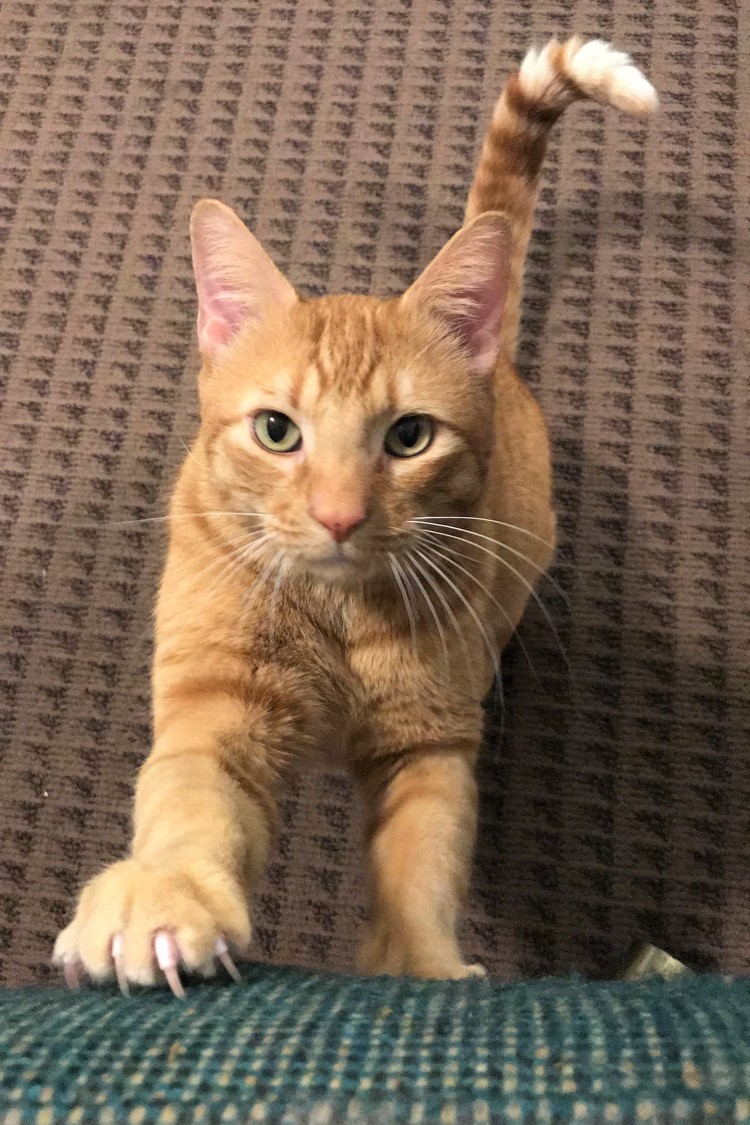 I think in some ancient, unknown language the word Cheeto must mean ‘explorer’.

This great orange adventurer came to us about a year ago as a young, stray tom cat that just needed neutering and vaccines and was going to be returned to the community (trap and release) from whence he came; but Jean fell in love with him one Sunday—texting the office manager Debbie photos of him ‘hugging’ her which bought him a reprieve. He quickly managed to charm Kimmy and a host of other employees to the point where most everyone was asking if he could stay.
Cheeto soon realized the one person he needed to work his magic on was Dr. Hempel, so, seizing the perfect moment (while Dr. Hempel was hanging some cabinets) Cheeto made his way into the tool bag, getting comfortable amongst the drills, and other assorted power tools. Not getting the reaction he wanted, Cheeto proceeded to jump into the cabinet, while Dr. Hempel was still in the process of hanging it–not minding the loud sounds of the drill, forcing Dr. Hempel to stop his work and pet him. It worked. He was allowed to stay.
Little did we know the kind of shenanigans this super- inquisitive ginger was going to get into.
The first incident of note this fearless individual took part in was the great escape into the attic, only to fall through the ceiling in the kennel. One day, poor Alyssa was quietly folding some laundry when she heard a loud crashing sound and saw a great orange streak of fur go flying out of the room amidst a pile of destroyed ceiling panels and dust. Much to his dismay, after Cheeto was inspected and found to be free from injury, he was vigorously shampooed to remove any attic debris he may have collected on his journey. You would think he would have learned from this experience, but no, on a second occasion, months later, Maria was in the kennel and heard the desperate meowing of a cat in peril. She followed the sounds of distress to the storage closet-only to find the lower half of an orange cat dangling from yet another broken ceiling panel, trying frantically to pull himself back up. His reward after his rescue? Another thorough scrubbing in the bathtub. He was not amused and has not been in the attic since.
Most people think of cats as fastidious groomers –taking great pride in their appearance. Cheeto does not fall into this category. Instead, on every occasion where he can make an escape, he will run to the nearest pile of dirt he can find and roll around in it until he is fully coated like an uncooked, breaded, KFC chicken breast. On one or two occasions, clients have come to inform us of the orange cat that just shot out the front door, only to have the receptionist stroll out, knowing full well, Cheeto is taking a luxurious dirt bath in the front planter. He has been known to race employees at full speed out back, to the open warehouse door, only to slam on the brakes the moment his paws hit the dirt and nose dive into his happy place, rolling and chirping in delight as he works the dirt, leaves and sticks into his fur. In retrospect, had we known of his propensity to dirt dive, we probably would have named him Pigpen, given the puffs of dust that often waft from his coat when he’s being petted.
His love of dirt can only be matched by his love of snacks. He knows where all his favorite snacks are stored, and he knows exactly how to get to them. He has been found inside cabinets where he has opened a jar of treats, and while enjoying one or two for himself, he will unselfishly toss many out onto the floor for the waiting Smudge, Rascal or Charlie to enjoy as well. He learned how to unlock his cage at night, so he must be double locked, to keep him from all night snacking expeditions and the inevitable burglar alarm activation. He is truly the smartest cat I’ve ever known–his ability to problem solve is astounding and you can’t help but love him even though he is always into something. It’s like when you have a toddler and it’s suddenly gone quiet….you just know something’s up and you have to go see what they’re getting in to.

So, when all is said and done, we realize Cheeto is an adventurous soul and needs to be in an environment where he can exercise his superior cat intellect and thrive. Someplace where he will be safe, but can still get into some harmless, Tom Sawyer-esque mischief. He has a potential home on a large Oregon ranch, where there is a fish pond, horse barns (complete with mice to chase) and a little cat-friendly dog, we just have to get him there. Until that day, when he gets to go to his forever home, we will do our best to keep him entertained and content, and if you see him cruising passed the front desk, (or sailing over the front counter) say hello to one of the coolest cats you might ever meet. 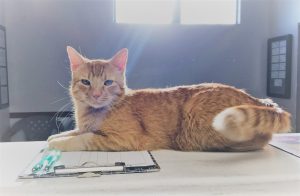 I highly recommend Mountainview Small Animal Hospital. I have 4 dogs and have used them for years for regular medical check-ups to surgeries. From the minute you walk in you are greeted by caring, friendly people. The doctors are exceptional. They will explain medical problems in layman terms and are very concerned. The dogs are treated in a very caring way. I have full confidence with their service.
— Donna N