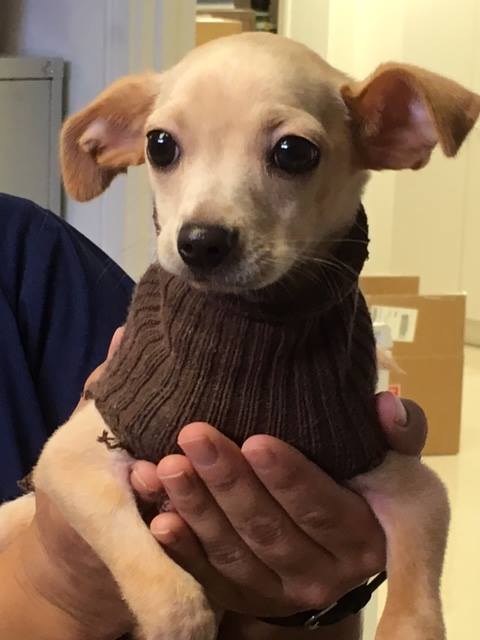 The local shelter we work with, Animal Friends of the Valley, brought this pup in for evaluation. He had been attacked by a much larger animal and had terrible wounds all over his tiny body, including a deep wound to the abdominal cavity. Despite his grave injuries, this little guy still had the sweetest disposition and Dr Hempel couldn’t bear knowing he might be put to sleep due to the extent of his wounds–so he asked permission from the shelter to proceed with the risky surgery. Permission was granted and the little dude pulled through the surgery and his wounds healed up after lengthy treatment and hospitalization.
After the allotted shelter waiting time, he was released to our permanent custody for re-homing.
He was so tiny, none of the baby T-shirts fit him, so he had his outfits fashioned out of tube socks, cut to fit. In this photo he is showing his flair for fashion, modeling a men’s brown dress sock. His affinity for sock wear earned him the temporary nick-name “Tube Sock Steve”, but we know his forever home will give him a name that fits his personality.
The best part of this story is how Dr Hempel’s family fell in love with him as much as the staff did, and after some ‘convincing’ (by his wife, daughter and granddaughter) Dr Hempel agreed to add this little fella to the Hempel household where he will be allowed to cuddle with his new best friend Tessa, whom he has grown to love.
After getting to know him they decided to call him “Newton” (“Newt” for short). When “Newt” is not losing at tug-of-war with “Eddie”- who currently outweighs him by about 15 lbs, he is spending quiet, cuddle time with his favorite person Tessa, who exclaimed when “Newt” was brought home for good,”this is the best day of my life!”
I bet “Newt” thought the same thing.

Our dog has anxiety and digestive issues that the doctor has really helped. Mountainview is a friendly, comfortable place to visit.
— Chris F.